Farmers are preparing to sow large quantities of vegetables in Elul, and cultivate them according to the beit din guidelines. In this way, during the first few months of shemitah we will have vegetables with kedushat shevi'it (shemitah sanctity). This year, farmers are preparing to extend the tomato growing season so in February, and perhaps even March. This means that there will be tomatoes with kedushat shevi'it available that were planted before Rosh Hashanah.

Advanced technology facilitates storing a greater variety of fruits and vegetables for longer periods. Vegetables that grew during the sixth year, which are stored in special refrigerators for several months, are released to the market throughout the shemitah year. Today this technique is employed for apples, carrots, potatoes, and more. At Torah VeHa'artez Institute, in preparation for the upcoming shemitah year, we discovered a method to store cabbage heads for three months in a special refrigerator.

Shemitah laws do not apply to plants growing in unperforated planters with a maximum volume of 330 L, growing indoors. Nurseries bring all of their saplings into special hothouses with non-porous nylon sheets on the ground, under close rabbinic supervision so they can continue to provide saplings while observing shemitah laws.

Thanks to Torah VeHa'aretz Institute, a major portion of public gardening in Israel is performed in accordance to halachah during shemitah. Over the past months, the institute's agronomist, Dr. Motti Shomron, met with decision makers in charge of public gardening in dozens of municipalities: cities and in local and regional authorities to explain how to properly observe the shemitah year. In principle, public gardens should move from annuals to perennials, perform all of the seasonal treatments on trees and plants prior to shemitah. During shemitah, it is permissible to preserve and maintain existing plants.

Sowing is generally performed in early winter and is forbidden during shemitah. There are farmers who sow triticale (a hybrid of wheat and rye used for animal fodder) early, before Rosh Hashanah. The concern is that if the grain sprouts too early and there is a dry spell, the sprout will die. For this reason, farmers sow the seeds deeper than usual, add more seeds per hectare, and avoid watering them after sowing. In this way, the seeds will only sprout after the early rains of the year.

Even farmers who rely on heter mechirah, and need to sow during the shemitah year, make efforts to perform as many agricultural activities as possible prior to shemitah. For instance, they plow before the shemitah year begins.

Tzomet Institute developed a device called the shemiton, which facilitates sowing with a gerama (indirectly) during the shemitah year.

Etrogim are harvested before shemitah to avoid performing forbidden melachot during the shemitah year. 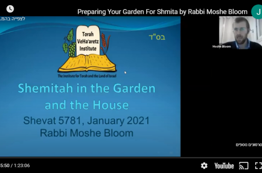 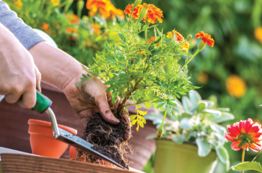