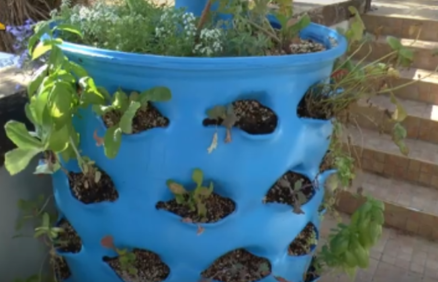 Garden barrels (a.k.a. vertical composting garden towers) provide a novel and cost-efficient way to grow vast amounts of vegetables in a relatively small space, even in urban areas. How can we use them without transgressing the prohibition of kilei zera'im?

Question: Garden barrels (a.k.a. vertical composting garden towers) are large containers full of soil, with pockets. In Israel they are sold as Havitutim, as they started out as a barrel of strawberries—havit-tutim. It is possible to grow 70 plants using the floor surface of merely half a meter. One plant grows in each pocket. Generally, these containers are used for home gardening or in educational institutions and can be used to cultivate organic vegetables for home consumption, at a low cost and with relatively little water use.

Can we use garden barrels without transgressing the prohibition of kilei zera'iam (interplanting)?

Answer: There should be 1.5 tefachim (12 or 15 cm; Rabbi Chaim Na'eh and Chazon Ish, respectively) between different types of plants, horizontally.

Vertically: Some hold that all plants in the same column need to be the same species, since a difference in height is not considered a heker. Rabbi Yehuda Amichay, head of the Torah VeHa'aretz Institute's halachic department, though, permits planting different species 1.5 tefachim from one another, vertically.

If there are less than 1.5 tefachim between plants horizontally, one can erect a partition 10 tefachim tall (80 cm) by 4 tefachim (32 cm). However, this would detract from the beauty of the barrel. Creating a partition inside the barrel doesn't help. The problem with kilei zera'im is marit ayin, that the seeds and leaves appear to be mixed and too close together. There is no problem that the roots intertwine.

If there is less than 1.5 tefachim between pockets, it is possible to skip a pocket or plant different varieties of the same species: cherry tomatoes and regular tomatoes; peppers of different colors, etc. This does not constitute kilei zera'im.

If the pockets are not on top of one another, measure from one plant to the next, not between rows.

In conclusion, there should be a separation of 1.5 tefachim both horizontally and vertically between different types of plants.

Garden towers are used not only for cultivating vegetables, but also for growing flowers and herbs. Are the halachot different in these cases?

There is a machloket whether plants that produce edible vegetables need to be distanced from flowers. Rabbi Mordechai Eliyahu is stringent, while the Chazon Ish is lenient. We, at Torah VeHa'aretz Institute, generally follow Chazon Ish's ruling.

While these are not considered food per say, and are used only for flavor, we are still stringent with regards to kila'im.

Mint and spearmint. One should avoid planting mint in garden barrels along with other plants, even if there are more than 1.5 tefachim separating the mint from other plants. Mint is invasive and spreads quickly, so in a relatively short time it can cause an issue of kilei zera'im.

Herbs with perennial trunks (including basal, lavender, and rosemary). Such herbs are halachically considered trees, so the prohibition of kilei zera'im does not apply to them. The full list of such herbs is available under halachic guides on our website, here.

Given that this is the case, "tree" herbs can be used as an excellent solution for separating different types of herbs or other vegetables, if the distance between the pockets is less than 1.5 tefachim.