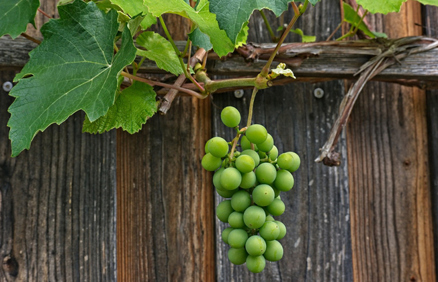 “Do not sow your vineyard with another crop, else the crop—from the seed you have sown—and the yield of the vineyard may not be used (Devarim 22:9).”

Chazal explain pen tikdash as pen tukad eish; when interplanting in the vineyard, the grapes are forbidden to eat and must be burned!

It is forbidden to plant a grape pip with two other types of seeds from grains, legumes, or vegetables; it is also forbidden to plant a seed of the above categories in close proximity to a grapevine. It is forbidden to actively cultivate kila'im, which includes watering, fertilizing, and weeding. This prohibition applies to every annual plant (defined as a vegetable, not a tree) cultivated for human or animal consumption. If the vegetables sprouted on their own, and the vinegrower did not notice them there, the vegetable and grapevine are not prohibited, but either the grapevine or vegetable need to be uprooted immediately to avoid cultivating kila'im. However, after the vinegrower becomes aware of these vegetables and does not uproot them, this is called kiyum, that is, it is that he is actively cultivating kila'im and this can prohibit both the grapevine and vegetable. In the case that vegetable growth comes to the vinegrower's attention but he does not realize that it is forbidden, a competent rabbi should be consulted.

If weeds sprouted in a vineyard or garden, they are only forbidden when they are regularly grown for human or animal consumption. It is noteworthy that many common weeds in Israel are grown for these purposes (mustard, vetch, wild wheat, wild barley, oats), so it is important that one's garden is weed-free next to the grapevine, especially when grapes blossom.

What is the necessary distance between vegetables/legumes/grains and a grapevine?

If there is a fence at least 80 cm high separating the grapevine from the other plants, this would not be considered kila’im, and the fruit is permitted. A deep ditch or "tzurat hapetach" (two poles with a string or board between them, lit. "the structure of a doorway") also serve as a separation.

There is a difference between vegetables and grapes: vegetables are forbidden from the time they take root, while grapes are forbidden only when they reach the size of a pol lavan (a white bean), that is, in the beginning of the ripening process. At this point, most opinions forbid the grapevine and fruit developing after this point is also forbidden.

If there is a doubt about kilei hakerem for a specific vineyard, it is forbidden to eat the grapes. Although Arabs sometimes grow vegetables (tomatoes, cabbage, etc.) under their grapevines, since most table grapes are not grown as kila'im (resting on the halachic principle "kol deparish meruba parish"), it is permissible to buy grapes (and vegetables) from vendors standing on the roadside. In general, it is always preferable to buy fruits and vegetables from a place with kashrut certification.

We can't know for certain why the laws governing kilei hakarem are so strict. It could be because the wine produced from the grapes often are used for mitzvot and for sacred purposes, such as the wine libations in the Beit Hamikdash, kiddush and havdalah, weddings, birkat hamazon with a zimun, brit milah, and pidyon haben, and others. When there is a greater potential and an extra measure of sanctity, we need to be more meticulous.

The prohibition of kilei hakerem applies also in the home and in hothouses.

If a single grapevine is surrounded by a fence (at least 10 tefachim high [80 cm] and at least 4 tefachim [32 cm] long on either side), within the fenced-in area other plants (grains/legumes/vegetable) need to be distanced from the grapevine by 4 amot (1.92 cm).

There is no problem to plant a tree next to a vineyard, but one should be stringent with intermediate plants where there is a doubt whether they are trees or vegetables (such as passionfruit, papaya, goji berry, etc.). It is also permissible to plant a vegetable next to any tree (except grapevines).

In practice, we are lenient about growing a grapevine next to grass or flowers.