Shavuot: The connection between Shavuot, Megillat Rut, and Harvest 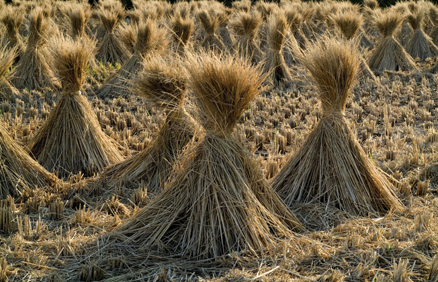 One reason cited for reading Megillat Rut on Shavuot is because it occurred during the harvest. Does this fact really matter? On the spiritual significance of harvest and its connection to the Giving of the Torah.

Tractate Sofrim states (14:3): "For Rut, Shir HaShirim, Kohelet, Eicha, and Megillat Esther, one has to make a blessing, and to recite [a blessing] on the reading of the scroll, even though it is written in the Scriptures."

The Maharil (Hilchot Shavuot) describes the prevalent custom of the Jewish communities at the time: "Megillat Rut is read on the second day [of the holiday] and each individual recites a blessing on the reading of the scroll (al mikra megilla)." The Abudarham (at the end of Mussaf on Pesach) cites two reasons for this custom: "So too, on the festival of Shavuot it was customary to read Rut (1) because it is written (Rut 1:22) 'At the beginning of the barley harvest' and this is the time of the harvest. (2) Another reason is because our forefathers only received the Torah and entered the covenant after circumcision, immersion, and hartza'at damim (the sprinkling of blood from the convert's offering) … and Rut also converted, as it is stated (Rut 1:16) 'For wherever you go, I will go.'"

The second reason mentioned above is understandable, since there is a clear, substantial connection between Shavuot and Megillat Rut: our national character traits are embodied by Rut and the process of our redemption from Egypt parallels Rut's journey to Judaism. Rut arrives at the conclusion "For wherever you go, I will go; wherever you lodge, I will lodge; your people shall be my people, and your G-d, my G-d" (ibid.). The same is true for the Jewish People when they wholeheartedly decide to accept the Torah, out of free will, and cling to G-d: "And they said: All that the L-rd has commanded we will faithfully do" (Shemot 24:7).

The first reason cited by the Abudarham (as well as the Radbaz 6:2091) seems quite strange. Is the fact that both events – the giving of the Torah and Megillat Rut – took place at the same time of year, at the beginning of the barley harvest, so important that it justifies reading Megillat Rut on Shavuot? We see, for instance, that the whole story of Ritzpa bat Aya (II Shmuel 21:9-10) also took place at the start of the barley harvest. Would it make any sense to read the passages of this story on Shavuot, just because it took place at this time?!

The Torah ties the festivals to the agricultural seasons. Pesach is tied to the Spring. But why are the other two festivals tied to agricultural acts of harvest (katzir) and ingathering (asif)?

The Maharal explains (Gevurot Hashem, chap. 46; Tiferet Yisrael, chap. 25) that each year is a creation unto itself; Spring symbolizes the beginning of creation; harvest marks its completion. It is G-d who determines and affixes the festivals within time, it is not the festivals that define the time.

Shavuot is the time of the giving of the Torah, "And the L-rd descended down upon Mt. Sinai" (Shemot 19:20); that is, the lofty Divine presence (elyonim) descended to the lowly earthliness (tachtonim). It is at this point that the most wondrous unity is manifest—between heaven and earth, the spiritual and physical. Harvest, in this sense, represents perfection in the physical world: "they who sow with tears reap with joy" (Tehillim 126:5).  This makes it the most fitting time for the Torah to be given.

The unity between the physical and spiritual on Shavuot is expressed in its special mitzvot:

The Yerushalmi (Shekalim 6:5) describes a picturesque allegory for the Giving of the Torah as two people holding a tallit: the luchot were 6 tefachim long and 6 tefachim wide. G-d held 2 tefachim and Moshe Rabbeinu (as the Jews' representative) held two tefachim, with 2 tefechim of space between them. This vision of two holding a tallit together is yet another expression of the perfect, harmonious union between G-d and the Jewish People.

According to the Maharal's approach, we can say that the harvest is not a condition for Shavuot, rather it is the symbol of a perfect situation: the Divine presence resting upon the Jewish People without any barriers, where we merit to receive the Torah each year afresh.

In light of this, we can say that what Megillat Rut and Shavuot have in common is harvest. Even according to the first reason cited by the Abudarham, both Rut the Moabite and the Jewish People go through the process of spiritual refinement, which culminates with harvest: with the completion of the creation. How precise are the words of the Abudraham: "Because it is written: 'At the beginning of the barley harvest' and this is the time of the harvest." That is, the fact that Megillat Rut took place at the time of the barley harvest is immaterial; the important thing was that it was the time of harvest, which expresses the perfection of creation and its ultimate purpose.

While the second reason expresses the human aspect of the conversion process, the first expresses the Divine revelation, which is manifest during the harvest period.