Taking challah from dough composed of different types of flour 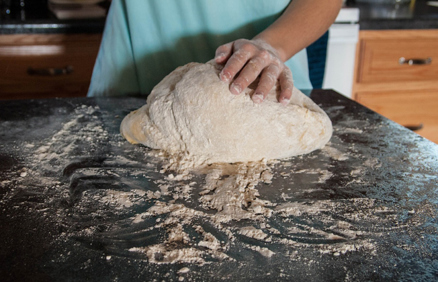 Can challah be taken from dough composed of different flours? When can flours be combined for challah purposes? What about taking challah from dough from one type of flour to exempt another? An abstract from Emunat Itecha Tammuz 5779, issue 124.

In recent years, there have been changes in types of breads produced both at major bakeries and in the private kitchen where various flours are used. This change raises several issues, including if the various flours can be combined to form one dough obligated in challah. Also, if it is possible to take challah from dough from one type of flour to exempt dough from a different type of flour.

Flour from the five grains is obligated in challah: wheat, barley, rye, spelt, and oats. The Yerushalmi cites two contradictory mishnayot regarding combining flours. According to one mishna various types flours can combine, while a different mishna says that this is only true for similar species (such as wheat with spelt). The Yerushalmi resolves this difficulty as follows: different flours can be combined for challah purposes when mixed together in a flour state. However, if each dough is prepared separately and one wants to combine them after they are kneaded by performing neshicha (placing the doughs next to one another so they are touching  so when a piece from one dough is taken, a piece of the other dough is taken as well), this can only be accomplished with doughs from a similar species.

The Yerushalmi deals with mixing various types of flour. The Acharonim discuss cases where each dough is composed of a different type of grain, and then the doughs are combined into one dough. Some maintain that even in this case the different grains can combine for challah purposes, since in the end it becomes a single entity. Others hold that in this case, they wouldn't combine for challah. So if one wishes to mix different types of flours, they need to be combined while still in the flour state.

After we are sure that both doughs have the same level of obligation, we need to define the  dough composed of various grains (which we will refer to here as "combined dough"). This is because we cannot take challah from one dough to exempt a dough from a different type of grain—such as a wheat dough exempting a barley dough. The issue of defining a combined dough is the subject of various halachic disputes. For this reason, we cannot take challah from a dough made of one grain to exempt a combined dough. There is an exception to this rule, however: taking challah from a wheat dough to exempt a wheat and spelt dough. This is because spelt is a subspecies of wheat. Barley can be combined with oats, spelt, and rye; oats with spelt; and rye with spelt (Shulchan Aruch YD §324:2). The rule, then, is that the flours in the combined dough include the type of flour used in the simple dough.