Mitzvah in a Minute: Peah

Question: Is there a link between the land-dependent mitzvot and Israel Independence Day?

Answer: This exact question was addressed to Rabbi Shaul Yisraeli following the War of Independence [which started on  Iyar 5708; May 1948] (Eretz Hemda I p.135): " … G-d's hand was revealed over His people in His land – the State of Israel was established … we merited once again to have Israeli sovereignty in the Land of Israel. It is necessary to ascertain to what degree the conquest and independence will influence the obligations of the mitzvot dependent on the Land of Israel."
Rabbi Yisraeli goes on to say that there are two conditions for territorial conquest to qualify as halachically binding: (1) the conquest is on behalf of the entire Jewish people and (2) the area is not under foreign jurisdiction. This conquest, however, need not be performed specifically by a king, the Sanhedrin, or the majority of the Jewish People. He concludes that these conditions were met in the conquest that took place in our time: "The conquest was performed on behalf of the entire Jewish People and not for a specific tribe or section of the nation. Following the recognition of the State of Israel, it is also not under foreign jurisdiction."

In a later addition to the letter, written after the Six Day War (Iyar 5727, June 1967), Rabbi Yisraeli wrote: "I revisited [the issue] and saw that even the nature of modern conquest, despite the fact there is only, it seems, a change of sovereignty without touching individual property, should be viewed as conquest for all [halachic] intents and purposes. … As such, the conquest is valid even in our times, just as the conquest was valid in the ancient era. This also includes the laws of sanctity that depend on conquest, when it is performed as a popular conquest (kibush rabim) … but all of the above still requires further investigation." See the full article in Hebrew, here. 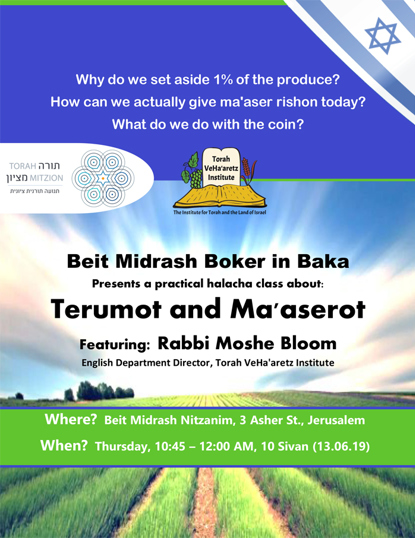 In light of sefirat ha'omer, we will take a look at barely. Is barley in the Tanach a food for humans or animal fodder? What is the significance of bringing the korban omer from barley? See here.

During the Six Day War, the IDF liberated the Sinai Peninsula, which includes Mt. Sinai. The end of our article on parashat Yitro is dedicated to the geographical identification of the exact site of Mt. Sinai and its ramifications. See here.