The Prohibition of Chadash in Israel Today: A Review 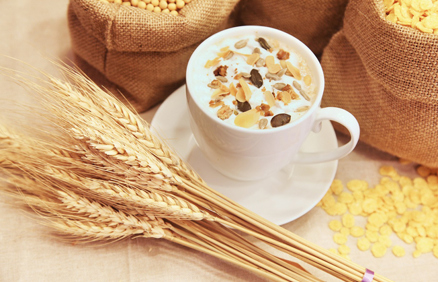 To understand which food products may be problematic vis-à-vis chadash in Israel today, we need to familiarize ourselves with the halachot, cultivation methods, and kashrut supervision procedures in place for products in Israel. We will review them in short.

The five types of grains are sown as summer and winter crops, both in the Northern Hemisphere—where there are the same seasons as in Israel—and the Southern Hemisphere, where seasons are the opposite from what they are here.

In Israel all five types of grains are winter crops: they are sown before Pesach in early winter, and by 17 Nissan they are permissible to eat, and are no longer considered chadash The harvest of grains meant for human consumption is performed after Pesach.[7]

However, since most of the grains eaten in Israel are imported, we have to look into the situation regarding grains imported from abroad.

Outside of Israel there are countries and regions that have both summer and winter crops for their grain. For winter crops grown in the northern hemisphere, there is no issue with chadash; even if they are harvested prior to the Omer offering, by the time they reach the market it will be after 16 Nissan, which will render them permissible. In contrast, summer crops, planted after Pesach and harvested in late summer will be considered chadash. Soo too, winter crops grown in the southern hemisphere are planted after Pesach and might come to Israel before 17 Nissan.

To avoid the prohibition of chadash, it is necessary to supervise the produce imported to Israel both for human consumption and for beer and whisky distillation. In addition, ready-made products imported to Israel, whether foods containing grains or beers and such, also require kashrut supervision for this purpose (aside from other kashrut issues, such as bishul akum).

According to the growing conditions, there is no issue of chadash from Pesach until early August, when the early summer crop is harvested that was sown after Pesach. This crop is forbidden as chadash.

While there is no law prohibiting the import and sale of chadash products, there is a law against kashrut fraud; it is illegal to sell chadash products bearing kashrut certification from the Chief Rabbinate or a local rabbinate.[9] The Chief Rabbinate does not monitor all food products (raw materials and finished products) imported to Israel, and customs does not provide the Chief Rabbinate with a list of importers and products imported. For this reason, it is altogether possible to import produce with chadash status. What prevents the import of these products is market conditions: Jewish customers are interested in purchasing products that are not forbidden due to the prohibition of chadash. Wholesalers and distributors who market products without kashrut certification as kosher risk breaking the law and facing lawsuits by a unit within the Chief Rabbinate in charge of kashrut fraud prevention and enforcement.

Kashrut certification provided by rabbinates abroad is generally not indicative that no chadash ingredients are present in a given product, since abroad many are lenient in this regard.[10]

As for the wheat kernels imported to Israel for milling, kashrut supervision is done in cooperation between Israel's chief rabbinate and various Badatz agencies. The supervision works like this: some of the wheat is imported from the United States, where there are various names for winter and summer crops. Only winter wheat is purchased from regions where summer crops are scarce. Moreover, from April to August we are not concerned about the summer crops, since all of the wheat from the winter crop has already been permitted the day after the Omer offering, and newer crops have not yet been harvested. The chief rabbinate does not approve the import of grains from countries without sufficient supervision (such as the Ukraine); yet as noted above, private businesses can such products, but without kashrut certification. From countries with proper supervision (such as Canada) where there are large quantities of summer crops, grains are not imported for human consumption.

As for other food products where there may be an issue of chadash: companies who want to import products and sell them as kosher contact the Chief Rabbinate, and the Rabbinate's Import Unit instructs them how to go about kashrut supervision. Generally, the requirement is for kashrut supervision from a local rabbinate from the time of sowing through and following harvest. Large factories that import raw materials independently, such as Tempo, have an entire supervision system for the barley imported for beer production. Kashrut supervision begins with sowing, by plot of land, monitoring the crops, and through the stage when produce arrives at the factory for distillation. Likewise, there is supervision for beer imported from other countries vis-à-vis the kashrut of all the ingredients (including the issue of chadash).[11]

Problems that may occur (while these are not known issues) can include: (1) the sale of flour from Israeli-Arab mills and from mills operating in the Palestinian Authority to bakeries that cater to Jewish customers, and (2) the import of products that have not passed through the Chief Rabbinate's Import Unit, and are nevertheless marketed as kosher. For this reason, customers should ensure that they purchase food products from a well-known company or a well-known bakery, bearing proper kashrut certification, and check that the products they buy bear the certification of the Chief Rabbinate, a local rabbinate, or a Badatz. There are also various natural products, such as tablets and oils, that might be manufactured from chadash grains. These products should be inspected for their date of manufacture and bear kashrut certification, stating that they do not include chadash ingredients. It is insufficient to rely on the certification of a rabbinate from abroad, unless it has the approval of the Chief Rabbanite of Israel or if it clearly states that there is no problem regarding chadash.

[1]  We follow the opinions of the Rambam and the Shulchan Aruch (YD 293:2; OC 489:10).
Outside of Israel, however, there are halachic authorities who are lenient in this regard and hold that the prohibition is only rabbinic in nature(today many rabbinates abroad are lenient in this manner), especially when there is room for doubt; see the Rema YD 293:3. In Israel, however, we are stringent.

[2] Here, too, we are stringent as it is the halacha regarding crops in the Land of Israel, according to the halachic rulings of the Rambam and Shulchan Aruch.

[3] While the Bach (Rabbi Yoel Yaffe Sirkes, Poland, 1561 – 1640) is lenient for gentile-owned chadash produce outside of Israel, his opinion was not accepted as practical halacha.

[4] For instance: if whisky is produced from barley, when this barley is sown following the day of the omer offering, it will be permitted to drink the whisky in Israel only after the next date of the omer offering, even though it has already been bottled. (Note: We know of a case in Israel where beer produced from chadash grain was stored in warehouses until after Pesach).

[5] In the Land of Israel, however, it is forbidden to harvest chadash grain for animal feed after the grain has reached a third of its growth.

[6] While there is an opinion among the Acharonim (Lechem Mishne  quoted by the Shach YD 293:6 ) to be lenient with grain derivatives, his opinion was not accepted.

[7] For harvesting grain for animal fodder after a third of its growth, see the article by Rabbi Yaakov Ariel in Emunat Itecha, issue 9 (5756).

[9] The Chief Rabbinate's guidelines for importers, See pages 6 and 25, where the rabbinate prohibits import of chadash produce to Israel (Hebrew).

[10] See the article by Rabbi Yirmiyahu Menachem HaCohen, Mehadrin, issue 11. This is the information I was told by the Chief Rabbinate's Kashrut Unit. For this reason, to approve sale in Israel the Chief Rabbinate requires approval that not chadash ingredients are present, and not just a global kashrut certification as they do with other products.

[11] Provided by Rabbi Amar, rabbi of the Tempo factories.