Israeli farmers planting olive trees just before Shemitah, supervised by Torah VeHa'aretz Institute. How can we support them?

Right before shemitah I was asked to serve as the Torah VeHa'aretz Institute supervisor for planting olive trees. Supervision is required for orlah and shemitah purposes since it is necessary to ensure that the saplings come from the nursery (also under the supervision of Torah VeHa'aretz Institute) straight to the field and are planted under certain conditions. In this way the trees' orlah years in the nursery will count, and the farmer will not lose out on a year of produce. Furthermore, we need to make sure that the soil encasing the roots does not crumble and that the trees are planted by the shemitah deadline.

Mr. Yuval Levin from Moshav Mazor (near Petach Tikva) took me to the field where 1000 new olive saplings would be planted to produce olive oil. I supervised the operation and Yuval introduced me to his father, who arrived at the field. Shmuel Levine, above the age of 80, is the owner of the field. Shmuel was born in Kfar Tavor and worked as a farmer his entire life. Even today he walks through his olive groves as if he were 30 years old. 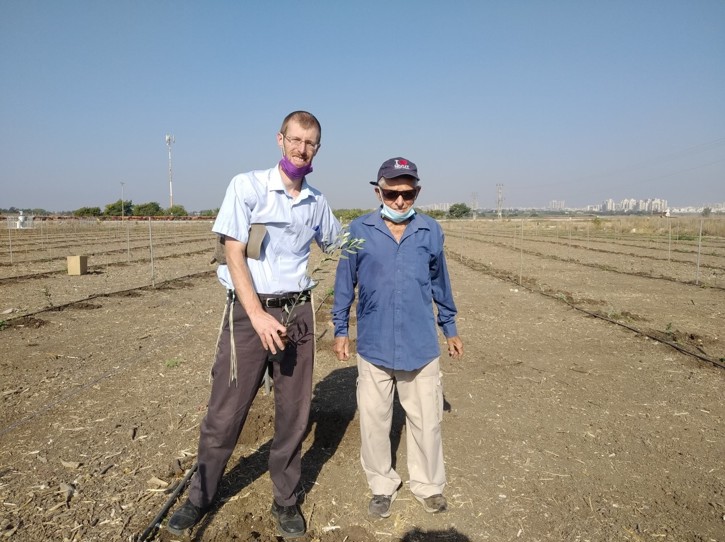 Shmuel asked me if I heard of his father, Rabbi Ben Zion Levine. "Your father was Rabbi Levine, the student of Rabbi Kook who was sent to be the rabbi of Kfar Tavor and the surrounding area?" I asked incredulously. The smile on Shmuel's face revealed that I was correct. Rabbi Ben Zion Levine was sent in 1931 by Rabbi Kook to serve as rabbi of Kfar Tavor and the surrounding localities. Rabbi Levine was a shochet, prepared boys for their bar mitzvah, and married couples; all the while, he owned a farm until his passing in 1977.

His son, Shmuel, was a farmer his entire life, and he and his two sons work together in the olive grove today. They produce high-quality, prize-winning olive oil.

At the end my supervision work, I entered the store and bought a bottle of locally produced, Jewish, Israeli, high-quality olive oil with a mehadrin kashrut by Modi'in Strip Regional Council. 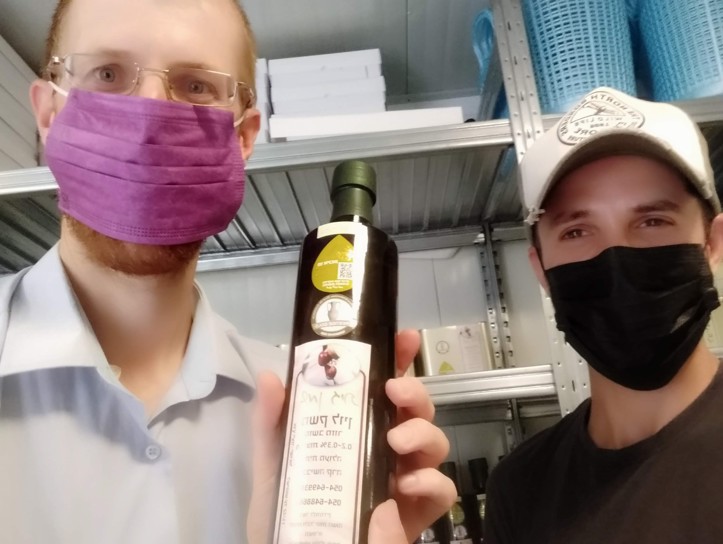 While most of us are not farmers, we are deeply indebted to them. To be a farmer in Israel in 5781 is a formidable challenge—on physical, financial, mental, and even security levels. We should truly admire people like Shmuel and his family, who already at 6 AM began planting the olive trees. We can express this admiration by buying Israeli produce. Buying produce from Jewish Israeli farmers strengthens our hold on the Land of Israel, deepens our bond to the soil, and allows us to perform the land-dependent mitzvot. True, at times the price is higher than for imports: olive oil from Spain can cost NIS 28 for a bottle of 750 ml, while Israeli olive oil costs about NIS 40, and there is no halachic obligation to purchase from a Jew when the difference in cost is more than one-sixth.
(As an aside, note that Spanish olive oil is usually sterilized so its acidity level will not be negatively impacted. However, this process compromises its nutritional value. Israeli olive oil does not undergo this process. While it is more expensive, its nutritional value is much higher. So buying Israeli olive oil will nourish your body and soul, while its imported counterpart might look and smell the part, but is actually inferior by far).
Yet there is definitely a hiddur mitzvah involved here. When purchasing produce grown in the Holy Land, with which the land-dependent mitzvot were performed, we support our Jewish brethren and thus fulfill the verse "Let him live by your side as your kinsman" (Vayikra 25:36), while ensuring that the land stays in Jewish hands, preventing hostile entities from taking hold of it. This, indeed, is mehadrin produce.

This is true seven-fold during the shemitah year. Support for Jewish farmers who make herculean efforts to observe shemitah is the right thing to do, both halachically and morally. Our fellow Jewish farmers, the "mighty warriors who do His bidding" (Vayikra Rabbah 1:1), need us.

The mutual responsibility aspect of shemitah

The inherent values of shemitah