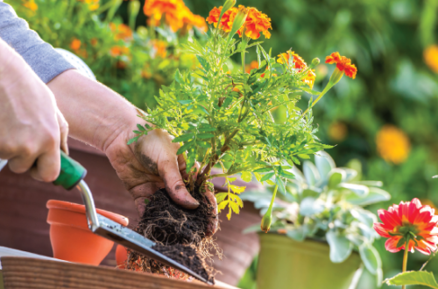 How should professional and private gardeners prepare for the shemitah year?

See here for the PDF version, which includes pictures.

Engaging in the beautification of Israel's landscape is an integral part of the mitzvah of settling the Land of Israel. Gardening in Israel is substantively different than gardening abroad. In any other country, the purpose of ornamental gardens is simply to give people a sense of calm and expansiveness and to allow them to enjoy beautiful sites. In Israel, in contrast, the engagement in the beautification of the landscape, which endears the land to its inhabitants, is a value in and of itself. Enhancing the mitzvah of settling the Land of Israel by increasing its aesthetic nature is praiseworthy, indeed.

For this reason, we need a break for one year. A year of rest for man and soil brings anyone who treads the ground to encounter Yehoshua bin Nun upon his entrance to the Land of Israel, when an angel commands him: "Remove your sandals from your feet, for the place where you stand is holy" (5:15). Nevertheless, this sabbatical is not intended to revert the land to a state of chaos and fill every garden with thorns and brambles. Abstaining from certain activities, while knowing that performing other activities depends on halachic questions and requires clarification, brings this awareness to life for each gardener and homeowner. And the sanctity of the Land of Israel lives on in the hearts of all.

This guide was written for professional and private gardeners; what is true for farmers is not necessarily true for gardeners. Farmers deal with food—vital staples for basic sustenance; gardeners are involved in matters perceived as luxuries. For this reason, halachic rulings for farmers differs from rulings for gardeners. Here we do not search for the lenient opinions to rely on in extenuating circumstances; rather we looking for the conventional, straightforward halachic guidelines—whether stringent or lenient. This is where the differences in halachic guidelines stem from.

Planting trees and other plants

Fruit trees rooted in a clod of soil in a perforated pot (with a perforation the diameter of at least 2.5 cm) prior to 15 Av, which stood on the soil before 29 Av (so they are considered connected to the ground), can be planted until Rosh Hashanah. This is provided that the clod of soil encasing the roots does not crumble during the transplant.
If the clod crumbles, the tree must be uprooted. A fruit tree sapling growing in an unperforated pot, or in a nursery placed on a sheet that separates it from the ground, may be planted until 29 Av.

It is also possible to plant geophytes (bulbs) before Rosh Hashanah, which will flower during the shemitah year. As mentioned above, they can be planted (and take root) before Rosh Hashanah. Those planted right before Rosh Hashanah will take root following rainfall, and flower from autumn to winter. It is possible to regulate flowering throughout long seasons by refrigerating some of the bulbs, which encourages early flowering. Taking root can be sped up by advanced storage in refrigeration on a moist growing platform. Flowers that can be sown before shemitah as bulbs include: anemone, gladiolus, iris, narcissist, cyclamen lily, amaryllis (hippeastrum), and buttercups, among others.

Note that the only leniency to prepare plants during the shemitah year in nurseries applies to plants grown on detached platforms, under special conditions. These conditions do not exist in most nurseries, so they generally prepare plants and saplings during the sixth year. For this reason, it is important to order saplings in advance from nurseries for the eighth year to allow them to duly prepare during the sixth year. If nurseries prepared plants during shemitah in a forbidden fashion, it is forbidden to purchase plants from them during the eighth year.

We may not prune mature trees and bushes during the shemitah year. For this reason, it is recommended that we fully prune all plants in need of pruning during the sixth year. Tree pruning should be performed, professionally as detailed below:

Pruning to correct branch extensions and other shape corrections should be performed throughout the summer preceding shemitah.

Chapter 4: Fertilization, Weeds, Lawns, and Preparing for the Eighth Year

Meticulously weed the garden prior to the shemitah year to avoid unnecessary weed treatments (such as spraying) during shemitah. It is possible to use soil sprays during autumn (on weed-free soil) with chemicals that prevent weed growth (pre-emergence herbicide), watering them into the soil. Such pre-emergence herbicides can stay in the soil for a long time and can harm certain crops. For this reason, opt for herbicides that remain active during the winter of shemitah, but not any longer. Such herbicides include: Stomp, Ronstar, and Goal. If the area in question is clear of plants and weeds, and is not intended for future plant growing, it is possible to use a combination of Alion and Diurex. Application of such herbicides leaves the area weed-free for a longer period of time. Ensure they do not run off to adjacent areas. In any case, it is important to closely follow the manufacturer's instructions to prevent damage to other garden plants.

It is also possible to spray the edges of the lawn with contact herbicide, such as Roundup (or other glyphosates), Deganol, and others. Appropriate herbicides can be effective for several months. Another method, without using chemical substances, is covering the ground with nylon sheets and spreading Palrig on top of them.

Perform all activities, when possible, during the sixth year so they can be avoided during shemitah. These include: lawn thinning, aeration, and fertilization, among others.

It is best to perform various activities during the sixth year to facilitate planting the new garden immediately following shemitah, for example: chemical soil sterilization or soil solarization against pests and weeds; multi-year herbicide during the summer; deep tilling to enhance and aerate the soil, and more. Performing these activities during the summer will make it possible to plant the garden immediately after the end of the shemitah year during autumn; it won't be necessary to wait until the spring following shemitah.

To enjoy vegetable gardens during shemitah, prepare for planting or sowing appropriate crops during the sixth year. It is possible to plant winter crops, such as onions, kohlrabi, and such. In this way, the garden can be enjoyed during the winter of shemitah.
Crops with long growing periods (such as potatoes and carrots) can be planted in the late summer preceding shemitah and can be enjoyed for a long period of time. It is also possible to bury onion sets in the ground, and the like, prior to shemitah so they will sprout following the winter rains and continue growing for an even longer period. Plant such vegetables by 15 Elul before shemitah. If the plants come with a clod of soil (Hishtil trays), they can be planted until right before Rosh Hashanah. Of course, only their basic growing needs (such as irrigation) can be tended to during the shemitah year, without fertilization or growth stimulators.

Throughout the shemitah year, receive guidance from a competent halachic authority about the activities that may and may not be performed in the garden. Note that the crops growing during the shemitah year have shemitah sanctity and are ownerless; one should not prevent others from harvesting them.

An additional solution is to build a small hothouse with detached platforms. In such hothouses, the laws of shemitah do not apply under specific halachic parameters, and all agricultural activities are permissible. This hothouse should be at least 80cm high, with completely waterproof material separating it from the ground, a roof, and four walls. The ground should be prepared with a slight decline to prevent pools of water from forming. The ground should then be covered with a strong nylon sheet with a black Palrig sheet on top.
During the winter, the roof of the building and two walls should be made of nylon. The other two walls should consist of hothouse nets to facilitate airing out the hothouse. During the summer, it is possible to replace the nylon roof with two 50 mesh nets placed one on top of the other. If needed, another net can be placed on top to provide shade. The ground of the hothouse needs to be clear of dirt throughout the entire shemitah year. In such hothouses, it is possible to grow plants that are no larger than 60L throughout the shemitah year. Since there are many additional details that are not connected to these halachot, consult a halachic authority before building such a hothouse.

Proper preparation of ornamental gardens ahead of shemitah contributes to the garden's proper maintenance during the shemitah year, under halachic guidelines. Our past experience teaches us that proper planning and organization, as well as changing budget priorities, facilitate optimal tending to ornamental gardens during the shemitah year. It is possible to move back tree planting to the sixth year and allocate the budget for inanimate landscaping (installing benches, playgrounds, exercise facilities, pergolas, fountains, etc.) for the shemitah year. In this way we will enjoy a relatively well-kept garden while meticulously observing halachah.

[3] Non-agricultural activities are permissible, under the following conditions:
1. Their purpose is not agricultural.
2. It is obvious to others what the purpose of the action is according to the way it is performed or its context.
3. If the matter in question is a biblical prohibited activity, such as pruning, it should be performed in a way that is not helpful to the plant, or at least in a way that it not optimal for the plant. See Shabbat Ha'aretz (1:18 §5, 20 §3; 2:8 §1).

[4] Every Jew is commanded to remit their land during the shemitah year and not allow others, who are obligated in mitzvah observance, to work it either: see Shabbat Ha'aretz (1:1 §1). To avoid transgressing this prohibition, Rabbi Shaul Yisraeli ruled that under these circumstances, one may apply to the Chief Rabbinate to sell one's portion of the garden to a non-Jew. Rabbi Shlomo Zalman Auerbach (Ma'adanei Eretz §13, Kovetz He'arot §8:3; Minchat Shlomo §41:3) ruled that one should declare one's portion of the garden ownerless in the presence of three people. Since selling a portion of joint property or rendering it ownerless raises legal issues, Rabbi Bakshi Doron suggests rendering one's portion ownerless and requesting that the HOA (Home Owners' Association) sell the entire garden to a non-Jew.
Rabbi Shlomo Zalman Auerbach (Introduction to the booklet Tipul Began Hanoy [tending to the ornamental garden], published by the Institute for Agricultural Research According to the Torah – Emunat Ish, 5732), rules that even if the HOA will use the funds to commission prohibited gardening during shemitah, it is permissible to pay the fee since it is a legal obligation; it does not necessarily constitute participation in prohibited activities. Rabbi Mordechai Eliahu advises paying the HOA fee as a lump sum, including the payment for other HOA expenses (thus considered havla'ah, lit. "swallowed up"), so the money will not go to the prohibited gardening activities but to other things (electricity, cleaning the building, etc.). His sources include Mabit (II §64) and Maharit (II §53).