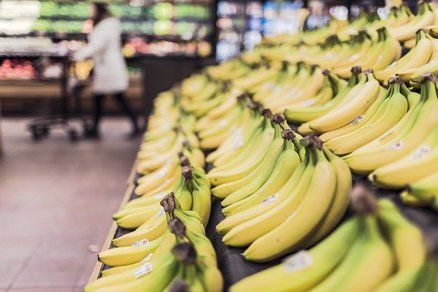 According to the Chazon Ish, do banana peels have kedusha, since in the world people eat them or give it to their animals?

Question: Are banana peels actually used for animal fodder? This has halachic implications regarding whether they have kedushat shevi'it according to the school of thought that holds that food edible to animals, even if not designated for this purpose, still has sanctity (Chazon Ish and his students – Rabbi Moshe Bloom [M.B.]).

One rabbi wrote me: "Banana peels do not have to be kept as kedushat shevi'it since they are not eaten by animals [as attested]; I sent a letter to the Biblical Zoo and the zoologist told me: "Here banana peels are discarded by all of the animals. However, it is superfluous to note that in the zoo there are conditions of plentiful food for the animals. For this reason, a product like a banana peel is treated as leftovers."

I believe, however, that it is difficult to prove from the words of the zoologist, especially since he notes that they are leftovers at the zoo, but he did not write that the peels are inedible. Furthermore, in eastern India and its environs it is conventional for people to cook, fry and otherwise eat banana peels. There have been attempts over the past few years to introduce banana peels into the Western cuisine for vegans or those on special diets. In light of the above, I want to ask the question whether banana peels have kedushat shevi'it since they could be edible to animals, even if most animals do not eat them.

Answer: As it is well known, Rabbi Shlomo Zalman Auerbach wrote explicitly[1] that any given food needs to be designated for animal feed; the being theoretically edible to animals is not sufficient to define it as food. He cites several proofs for this. However, in Ma'adanei Eretz[2] he writes that one should avoid walking on grass in muddy shoes since this spoils it, rendering the grass inedible to animals. He explains[3] the apparent contradiction by distinguishing between the time when livestock lived in the cities, when the grass was designated for them to eat, and the period when this was no longer the case. In the latter case, as it is today, even though the grass is technically edible to animals it nevertheless does not define it as animal fodder since there are no animals that will eat it now.

Albeit, he cites the approach of Rabbi Zeleznik, ztz"l, who maintains that it is sufficient that the crop be edible to animals in order to have kedushat shevi'it. The main proof[4] he brings is from the halachot that govern the lulav, which has kedushat shevi'it although it itself will not be used as a broom, rather for the purpose of a mitzvah. From here he proves that it is sufficient that the plant is edible to animals for it to have kedushat shevi'it. Rashi writes,[5] however, that in that time Lulavim were used primarily as brooms (palm fronds are ruined as they are used so their benefit and consumption coincide – M.B.), which is why they had kedushat shevi'it; from here it is clear that we follow the main use of the palm fronds (at any given time period – M.B.) to determine their sacred status.

Even if there is a minority in India who eat banana peels (as human food), this does not define most peels around the world as human food; in fact, there is rarely a type of food that is not eaten by humans in some place in the world. It seems that here we can bring a proof that we do not follow any given minority use, rather the majority, as the Gemara states (Sukkah 40a, according to Rashi): "Said Rava: Undesignated wood exists for fuel." That is, since most firewood will be used for kindling, they do not have kedushat shevi'it since they are not enjoyed as they are consumed. While there is a minority of wood used for heat, whose "benefit and consumption occur simultaneously," we follow the majority (Rashi explains that the other kindling is tuned into charcoal, which is used as fuel afterwards, which is why their benefit and consumption does not occur at the same time – M.B.).

For this reason, we need not concern ourselves with residents of India, who are not before us. According to Tosafot,[6] too, we can prove that we follow the majority; if so, crops that most people do not eat do not have kedushat shevi'it, even if an individual collected them for the purpose of eating. In light of the above, this is all the more so in the case of banana peels, which most people do not eat; we need not consider the minority who do.

While the questioner asked also whether banana peels might have kedushat shevi'it since some animals eat them. Even though the zoologist wrote that they don't feed the monkeys [(and other animals – M.B.] banana peels, he was concerned that it was due to the abundance of food at the zoo, but when necessary the monkeys would also eat the peels.

However, research and pictures of monkeys in their natural habitats (search Google for monkeys and bananas) show that monkeys do not eat banana peels. Rather, they peel the bananas (from the opposite side, not like humans), eat the banana, and discard the peel.

In conclusion, even those who are careful to handle foods that are edible to animals as having kedushat shevi'it even when not intended for animal feed would not have to treat banana peels (without parts of the banana stuck to it) as having kedushat shevi'it. [However, the fibers (strings) that are stuck to the banana peels are treated as the peel and not the flesh, since people don't eat them on their own. However, since they are edible, some are stringent with them – M.B.]

Note by Rabbi Moshe Bloom: The questioner did not mention monkeys; he spoke more generally about  animals, and the zoologist did not necessarily refer to monkeys either. Indeed, as Rabbi Yehuda Amichay notes, it is well known that monkeys do not eat peels in nature. However, there are some places in the world where banana peels are used for livestock feed, especially by smallholders. However, it seems that the use of banana peels as animal feed (in raw, powdered, or silage form)  is still in the research stage and not a general practice, as of 5782-2022. If by next shemitah (5789-2029) this becomes a common practice, the question should be discussed and reevaluated.

Below are several links about banana peels as livestock feed:

https://uknowledge.uky.edu/cgi/viewcontent.cgi?article=4728&context=igc – for chickens but in dried and powder form.

See here a description of banana peels as used for feed by smallholders (especially, but not exclusively, for ruminants): goats,, cattle,  zebras, rigs, rabbits, ducks, and even fish, primarily in small areas where bananas are grown: https://www.feedipedia.org/node/684

Prohibition of transacting with shemitah produce