Can I use oil with kedushat shevi'it to fry schnitzel? Can I prepare apricot jam? A look at the common food processing methods for various types of produce and the significance for shemitah. Chapter 16 of the Consumer's Guide to Shemitah.

[2] Radbaz (Ma'aser Sheni 3:11) and Aruch Hashulchan (§24:9) maintain that we follow what the conventional use is (derech ha'olam, the way of the world), even if this is not the primary use of the produce. For this reason, Aruch Hashulchan permits preparing beer and liquor from grains, and the Radbaz permits anointing with oil, even if the oil is primarily used for food consumption. This principle is also implied by the Mishnah Berurah §205:3 vis-à-vis blessings: the Shulchan Aruch states that if a vegetable tastes better cooked than raw, when cooked its blessing is ha'adamah, while in raw form it is shehakol. Mishnah Berurah adds that if the vegetable is also eaten by most people when raw, it would nevertheless be ha'adamah. This implies that if most people also use a given vegetable for its secondary purpose, it is still considered a standard use. On squeezing oranges for juice, Chazon Ish (§25:32, s.v. veyeish) is unsure whether one should follow the majority use of the produce (if the fruit is generally eaten and not squeezed, it is forbidden to juice it during shemitah) or a significant minority use (mi'ut matzuy) of the practice. In the latter case, only fruits where at least a significant minority of their use is juicing can be squeezed/juiced during shemitah. Otherwise, we would follow what most people would want; for instance, most people want to drink orange juice, so squeezing oranges would not be considered an unusual use. Thus, oranges are considered "earmarked for squeezing." Rabbi Kook (Mishpat Kohen §85) rules that the conventional use follows the majority use of any given type of produce. See also Shabbat Ha'aretz 5:3 §4.

[4] There are several Talmudic and halachic discussions that deal with the local conventions of a particular place and to what extent they influence the rest of the world. See Shabbat 144b; Rambam, Kila'im 5:18; Tosafot, Shabbat 92b, s.v. ואת"ל (ve'im timtzi lomar), Magen Avraham §320:1; Chazon Ish, ibid., s.v. uvekol. See also Chukkot Ha'aretz 5:18 §§1–2.

[5] See previous note. See Mishpatei Eretz 22:4 on Radbaz I §44: some people consume rose essence (rose petal extract) for health reasons, but this does not define the plant as a fruit tree but rather a medicinal tree. This is implied by Remah, OC §320:1: even if certain fruits are generally squeezed for medicine and not drinking, use as medicine is nevertheless not considered conventional use for shemitah purposes. However, the above sources discuss healthy people who eat certain foods for health considerations, in which case this would not be considered the conventional use. However, if we are discussing a defined group of people who adopt certain eating habits to pursue a healthier diet, it might be possible to define them as an ethnic group. That is, if this group of people generally uses or processes a particular type of produce in a specific fashion, it would be considered a conventional use. This issue requires further investigation. In any case, even when eating or drinking a certain food for medical reasons, one should nevertheless say a blessing on it. See Shulchan Aruch, OC §204:8.

[6] This is the ruling of Rabbi Eliahu, since if it will spoil without this action, this is considered darko, the conventional manner. Rabbi Ariel rules accordingly, based on the rulings of Rabbi Avraham Steinberg and Rabbi Nachum Weidenfeld (Beit Ridbaz, Mishmeret Lehabayit, pp. 21–23). Rabbi Yisraeli rules that it is possible to be lenient only when performing this action indirectly (grama).

[8] Pe'at Hashulchan §24:3 states that we are not obligated to eat the sections of vegetables that are generally cut off. This implies that it is permitted to cut off these parts. See also Rambam 5:3.

[15] Lemons are rarely eaten on their own; their general use is lemon juice. Tosefta (6:6) permits squeezing herbs, and lemons impart flavor like herbs. The following rule accordingly: Chazon Ish §25:32, s.v. velimon; Kerem Tziyon 13:8.

[18] Kerem Tziyon 13:8 on juicing carrots or tomatoes. This is Rabbi Eliahu's ruling.

[21] Pe'at Hashulchan §24:4, that it is forbidden to prepare wine from apples or liquor from dates. See also Shabbat Ha'aretz 5:3 §4. However, if it is clear that a certain product is conventionally juiced in the drink industry, it seems that this would be permitted. On adding shemitah cherries to wine to prepare cherry wine (vishniac), see Hilchot Shevi'it §5, Kise David §35, who writes that technically this is permissible, but refined individuals should be stringent. It seems that it is permitted to use shemitah wine to prepare cherry vishniac, since it enhances the taste of the wine. This is implied by Mishpat Kohen §85, who deals with the issue of inomilin (אינומילין, explained by various commentaries as a mixture of wine and honey, or wine, honey and pepper, or simply wine mixed with other ingredients).

[22] Citrus peels are generally meant for animal fodder; using them for human food enhances their status. This is why it is permissible to use the peels for this purpose, even though when the peels are soaked in alcohol they can no longer be used for anything. With regard to myrtle berries, they are not generally eaten and it seems that they therefore do not have shemitah sanctity to begin with. Even if we say that they have shemitah sanctity (see Bartenura on Ma'aserot 1:3, s.v. vechol hashechorim), it would only be so if the one harvesting or planting the myrtles did so for this purpose, so it would nevertheless be permitted to use them in this way.

[23] It seems that pickling and cooking are two essentially different processes. While there are halachot that consider pickled foods cooked (kavush kamevushal), this has no bearing on shemitah-related laws. Therefore, while cucumbers are conventionally pickled, it is forbidden to cook them. This is the ruling of Rabbi Elyashiv, Mishpatei Eretz 22:3.

[24] Rambam 5:3. The rationale for this mitzvah is that preparing the fruit or vegetable in a different way than its standard form of consumption is considered hefsed (and shemitah food may be eaten, but not destroyed—"לאכלה ולא להפסד"). Some posit that there is a prohibition of changing the mode of regular consumption that is independent of the prohibition of hefsed; these posekim hold that there is a Scriptural decree to eat sacred produce in conventional manners only. See Rash 8:2, s.v. yerushalmi; see also Shabbat Ha'aretz 5:3, n. 2. About the conventional manner of food preparation only in a certain part of the general population, see above, §A.1–3.

[28] Hilchot Shevi'it, ibid., notes that it is permitted to discard it, however it is best to be stringent and squeeze it thoroughly with a spoon before discarding it; in general, it is difficult to be lenient with lemons, since the taste of the lemon remains even after its use. See ibid., §6, Kise David §57.

[30] This is the ruling of Rabbi Eliahu; Rabbi Elyashiv is quoted as having the same ruling, Mishpatei Eretz 22:3. Rabbi Eliahu adds that it is forbidden to perform an unconventional action with the food that would cause other people to not want to eat it.

[31] Mishpatei Eretz 22:7 and n. 15, quoting Rabbi Elyashiv. Elsewhere (21:7 and n. 10) he is quoted that one should not oil a pan or tin with shemitah oil to prevent foods from adhering to it, unless the oil is also meant to enhance the taste of the dish. Rabbi Eliahu is lenient in such cases.

[32] Chazon Ish §25:32, s.v. min, permits preparing pudilla, which apparently is a type of jam. Hilchot Shevi'it (§5, Kise David §18) adds that the it is better to be stringent that the form of the produce be recognizable a bit (just as we are stringent with blessings, where we say ha'eitz only if there are recognizable bits of fruit in the mixture; Shulchan Aruch, OC §202:7, and Mishnah Berurah). This is the ruling of Rabbi Ariel.

[33] According to Rabbi Kook (Mishpat Kohen §44, 45; Da'at Kohen §240) it is forbidden to prepare jam from oranges, since this is not a widespread use of oranges; he only permits this for orange peels (these are often used commercially to prepare drinks, jams, and candy).

[36] This is the ruling of Rabbi Eliahu, who explains that Rambam (Terumot 11:4), who forbids pickling onions in terumah vinegar, forbids it only because the onion completely spoils the vinegar (see Radbaz, ibid.). However, when pickling vegetables in vinegar, the vinegar does not become spoiled and can be reused, even if it isn't generally used again. This is the ruling of Rabbi Yisraeli. See also Hilchot Shevi'it §5, Kise David §40, who permits pickling in vinegar since it is generally used for pickling and is not normally eaten on its own as in Chazal's time.

[37] This is the ruling of both Rabbi Yisraeli and Rabbi Eliahu. Their reasoning is that even if these products won't be edible when frozen, it is permitted to freeze them since a change that can revert to its original state is not considered spoiling the food. Aruch Hashulchan (24:8) states that it is forbidden to congeal drinks. Rabbi Elyashiv, however (qtd. in Mishpatei Eretz §22, n. 29) permits this as coagulation increases the drink's importance.

[40] Pe'at Hashulchan §24:4. According to Rabbi Kook (Mishpat Kohen §85, s.v. umah shekatuv), it is possible that it is even a mitzvah to eat the food in this state so that it will not be thrown away or spoil.

[41] Rabbi Frank, Kerem Tziyon, ch. 13, Gaon Tzvi §2; Rabbi Auerbach: Kerem Tziyon, ibid., Gidulei Tziyon §1, Minchat Shlomo §46, who writes that the prohibition of hefsed is not a function of the food's sanctity (as is the case with terumah), rather of the fact that the produce is rendered ownerless. Therefore, people only have the privilege of taking this produce if they intend to eat it, not to waste it. At the same time, there is no biblical obligation to eat this produce in its sacred state. For this reason, it would be permitted to mix it together with non-sacred food (thereby nullifying its sacred status, if it is a minority of the food mixture).

[42] Since we may not nullify a mitzvah lechatchilah.

[43] Az Nidberu X §45, who permits this at the end of his responsum. Weighing and measuring is forbidden only in the context of commerce. In contrast, weighing produce at home and other similar actions that are performed in non-commercial contexts are permitted. See Shabbat Ha'aretz 6:3 §2. On the prohibition of measuring, see Chapter 9, §B. 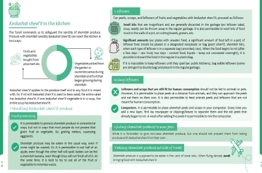