Shemitah is a wonderful mitzvah with many beautiful rationales. However, observing it in Israel today is no simple feat. How can we provide agricultural produce to about 7 million Jews who live in Israel? If we allow the land to lie fallow (the plain meaning of the biblical commandment), besides dealing a heavy financial blow to farmers, what will we all eat during the shemitah year?

Initially, the agents sent by the beit din (rabbinical court) would sit at the entrances to the villages. People would come and bring produce, and they [the agents] would take the produce and give the person food for three meals. The rest, they bring to the otzar (storehouses) in the city.

The time came to harvest the olives. Agents of the beit din (would hire workers, who would harvest the olives; then crush them in the olive press; then transfer them into casks; then place them into the town’s otzar. On Fridays, they would distribute the oil to all the families according to the number of people.

That is, instead of each person harvesting their own field, the beit din would be in charge of this on behalf of the public. This solution is called otzar beit din.

Otzar beit din facilitates bringing fruit (and vegetables during the first months of shemitah) that have kedushat shevi'it. Private individuals pay the otzar beit din to cover its expenses (not considered payment for the produce). Farmers cultivate the produce according to the beit din's instructions since certain actions are permitted during the shemitah year: those performed for maintenance (ukmei) are permissible, as opposed to acts done to enhance  the produce (avruyei), which are forbidden.

The largest otzar beit din today (5781-2) is Otzar Ha'aretz, established three shemitot ago by Torah VeHa'aretz Institute, based on the following principles:

From the end of the winter, Otzar Ha'aretz provides fruit with kedushat shevi'it.

For the first few months, Otzar Ha'aretz provides vegetables with kedushat shevi'it by planting extensively before the shemitah year so the vegetables will sprout before the beginning of shemitah, to be harvested during shemitah.

The produce is sold throughout the country: green grocers and sections in supermarkets, especially in areas with a large National Religious and Charedi-Sefaradi population  interested in this produce. This year, online purchases with home delivery (once a week) will be possible, too.

Buying from Otzar Ha'aretz makes the customers partners in keeping the land in Jewish hands and supporting Jewish farmers, while observing shemitah laws. It also affords them the merit to eat produce with kedushat shevi'it.

We encourage everyone to become a member of Otzar Ha'aretz now, at the Hebrew website: https://otzar-haretz.co.il/

See the translation of the Otzar Ha'aretz Hebrew website, here.

For English secretary, call: *9273 or email: office.otzarharez@gmail.com,
and ask for Sarit, the English-speaking secretary.

For halachic questions in English about Otzar Ha'aretz, contact me at 052-890-3729 and h.moshe@toraland.org.il.

Sources of produce in various types of stores

Otzar Ha'aretz – the optimal way to observe the shemitah year 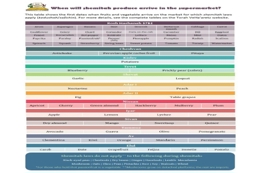