Agricultural produce in Israel comes from various sources during the shemitah year in various ways. The halachic parameters of each explained and ranked. Chapter 11 of the Consumer's Guide to Shemitah.

Heter mechirah is based on the ruling of Responsa Shemen Hamor (YD §4),[7] employed for the first time during the shemitah year of 5649 (1888–9) by Rabbi Yitzchak Elchanan Spector, Rabbi Shmuel Moholiver, and Rabbi Yehoshua Tronk of Kutna. It became established over the years by the chief rabbis of Israel. What heter mechirah essentially means is that the land is sold to a non-Jew, who then becomes the owner of the land. Subsequently, the land no longer has shemitah sanctity and the sefichin prohibition does not apply to the agricultural produce.[8] According to most halachic authorities, however, even when heter mechirah is performed the melachot that are Torah prohibitions should not be performed by Jews.[9]
The Chief Rabbinate, throughout the generations, has relied on this heter for the entire Israeli population. Heter mechirah produce is cultivated, handled, bought, sold, and used just like produce during non-shemitah years. See Katif Shevi'it, Chapter 24, for the halachic sources and principles of heter mechirah as well as the dissenting opinions to this heter.[10]

During the shemitah year it is permitted to grow plants indoors when the growing medium is disconnected from the ground (see Chapter 2 §4–5, and Katif Shevi'it, ch. 18, on halachic guidelines for crops grown in this manner). Sowing and planting vegetables are performed in the usual manner, as well as all other actions involved in cultivating the plants. This solution is expensive, logistically complex, and is not always profitable. On setting up a hothouse with detached platforms, see Appendix E.

The territory conquered by the Yehoshua bin Nun and the Israelites who left Egypt. This area includes the vast majority of modern Israel.[11] For vegetables and fruits that grow in this area (and outside of olei Bavel territory, see below) there is a dispute whether or not they have shemitah sanctity.[12] While the sefichin prohibition does not apply to this area, the prohibition of performing forbidden melachot does apply. Furthermore, since there are halachic authorities who maintain that the prohibition of lo techonem[13] does not apply to this area,[14] heter mechirah is more widespread than in areas sanctified by olei Bavel. On the borders of olei Mitzrayim, see §5 below.

The territory sanctified by the Jews who returned to the Land of Israel with Ezra and Nechemiah from Babylon in the early Second Temple period. This area is smaller than the area conquered by olei Mitzrayim.[15] According to most opinions, the border between olei Bavel and olei Mitzrayim in Southern Israel, is as follows:
The border begins from the southern tip of the Dead Sea, and continues along Nahal Tzin (Wadi Tzin), which runs from south of Sedeh Boker eastwards to Nahal Lavan (Wadi Abiad), adjacent to Nitzana.
The southernmost tip of the wadi is at 30°48' N. Whatever is north of this line is considered olei Bavel territory, while south of this line is olei Mitzrayim.
From Nitzana, the line runs north to Ashkelon,[16] near 34°25' W. East of this line is olei Bavel territory, while west of the line is olei Mitzrayim (that is, Cholot Chalutzah, most of the Eshkol Regional Council, and the former Gush Katif settlements are part of the olei Mitzrayim territory) according to halachah.

All the laws of shemitah apply in this area, including the prohibition of performing melachah, the sefichin prohibition, and all agricultural produce has shemitah sanctity.
Note that today we do not have precise knowledge as to the territory that was not sanctified, and some limit the olei Bavel territory (holding that the border between olei Bavel and olei Mitzrayim is more to the north). However, the identification above is accepted among many halachic authorities. See Appendix F.

Here non-Jews grow crops in their land in Israel, and the produce is not sacred.[17] Purchasing vegetables from non-Jews is possible when there is supervision that ensures that they are indeed the landowners. However, it is best to avoid purchasing such produce when this helps them increase their stronghold on the land (such as when the contract is made with them ahead of time, before sowing or planting).[18] Halachically, the status of produce imported from abroad is equivalent to produce grown in Israel by a non-Jew, and does not have shemitah sanctity.

H. Halachic order of preference for vegetables (not fruit)

The main objective consumers should keep in mind is to observe shemitah in the most comprehensive and best way possible. The order of preference is as follows:[19]

[1] During the shemitah year, melachot will either be forbidden or permitted based on the parameters of ukmei and avruyei (אוקמי ואברויי). Ukmei refers to acts performed to maintain the tree's current state and prevent it from dying. Avruyei refers to acts that increase the growth of the tree and its fruit. See Chapter 1 §A.4.

[4] See below regarding the lines dividing olei Mitzrayim and olei Bavel, see §B.4–5.

[5] This is the custom in Jerusalem, following the Beit Yosef, that crops grown by non-Jews in non-Jewish land is not sacred.

[6] The source of this institution is cited in the Tosefta, Shevi'it 8:1–2; Ramban (Vayikra 25:7) and Rashbash (§258) cite this as a practical solution. Other rabbis who agree with this solution: Chazon Ish §11:7; Kerem Tziyon ch. 17, Gidulei Tziyon §13; Betzet Hashanah p. 42. Rabbi Kook (Iggerot HaRa'ayah I §313) instituted otzar beit din in addition to heter mechirah, while heter mechirah was the primary solution employed and otzar beit din was an additional stringency.
For a discussion on this issue today, and a list of contemporary rabbis who oppose otzar beit din, see Katif Shevi'it, ch. 22 and 60.

[7] Rabbi Mordechai Roviyo, rabbi of Chevron (d. 5744, 1783), was the first to propose selling a vineyard to a non-Jew. On the theoretical level, heter mechirah is similar to mechirat chemetz, selling chametz to a non-Jew before Pesach and buying it back after Pesach. The process is performed to avoid Jewish ownership of chametz for the duration of Pesach, while making it possible to buy it back afterwards, thereby avoiding the loss of significant funds and resources. The heter of mechirat chametz is meant primarily for the commercial market and less so for the homes of private individuals. The sale of cows, goats, and sheep birthing for the first time to a non-Jew to exempt the firstborn foal, kid, or lamb from bechor sanctity for pure animals also operates on the same principle. So too, the sale of new vessels to a non-Jew to exempt them from the obligation of ritual immersion in a mikveh, works in the similar fashion (used often for hotels and restaurants). Heter mechirah, similar to mechirat chamtez, is primarily employed to facilitate the continuation of Jewish agriculture in the Land of Israel. It is not recommended to sell private gardens to non-Jews, since the heter is meant primarily for farmers and not for private gardens.

[8] The heter is based on the opinion of Rabbi Yosef Karo, that shemitah laws and sanctity do not apply to land owned by non-Jews: it is not forbidden to work the land, the produce is not sacred, and there is no prohibition of sefichin.

[10] The main reasons for this heter are as follows: (1) Today shemitah is derabanan; (2) Shemitah sanctity does not apply to land owned by a non-Jew and thus the prohibitions against performing various melachot do not apply; (3) The prohibition of selling land to a non-Jew in the Land of Israel is the actual taking over of the land by a non-Jew, not the sale itself. And since this sale is only temporary, and is meant to increase the Jewish stronghold on the Land of Israel, it is permitted; (4) The sale is valid under Torah law and is also legally valid under State law. (5) Observing shemitah in its original format will not only incur enormous economic losses, but is also liable to bring about the collapse of a significant portion of agriculture settlement in the Land of Israel, some of which are in Israel's periphery; (6) In light of the above, halachically it is permissible to use this sale given the situation. Additional rationales include: (a) Some maintain that today shemitah observance is only a middat chassidut (act of piety), which is a lesser level than a rabbinic decree; (b) There is a doubt as to the accuracy of the shemitah count; (c) The heter of Rabbi Yannai (Sanhedrin 26a).

In practice, the consensus does not follow this opinion; rather, that all of Southern Israel is considered olei Mitzrayim.

[12] Rash and Rambam dispute this. According to Rambam, these crops have shemitah sanctity, while the Rash believes that there is a doubt in this regard. See Shabbat Ha'aretz 4:26 §2 and the article by Rabbi Yoel Friedemann on the advantages of heter mechirah in the olei Mitzrayim, Emunat Itecha 103.

[15] Note that while the Hasmoneans conquered more extensive territories, the areas of their conquest are not considered sanctified.

[16] The border running north-to-south begins from the Old City of Ashkelon and runs southwards to Ein Kadis (biblical Kadesh) in the Sinai, adjacent to Israel's boundary, at the coordinates: 30°43' N longitude, 34°28' W.

[17] Some halachic authorities follow the Mabit's opinion that produce grown by non-Jews has shemitah sanctity. However, the main custom is that of Jerusalem, namely to follow the ruling of the Beit Yosef that there is no sanctity whatsoever in this produce.

[18] There are non-Jewish farmers in Israel and in PA-controlled territory and Gaza who sell specific vegetables to the Israeli market every year. Some authorities deliberate whether buying from these farmers during shemitah more than during other years is also considered strengthening their hold on the Land of Israel.

[19] The ranking featured above is based on pure halachic reasoning and also on broader halachic rationale of preserving Jewish Israeli "blue and white" agriculture and preferring it to buying imports or buying produce from non-Jews in Israel. However, there are many who differ, preferring to import vegetables from abroad or purchase produce from non-Jews in Israel to heter mechirah or vegetables that began growing prior to the onset of shemitah. There are also certain rabbis who prefer heter mechirah to otzar beit din. There are other opinions as well.

[20] This method has developed extensively in recent years, and a broader range of products can be stored for longer periods.

[21]Some are Israeli Arabs while others are residents of PA-controlled territories or in Gaza. 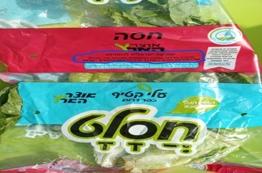 Chasalat Guide for the Perplexed